On 5th and 6th September 2009 Novi Sad Jewish Community celebrated this year’s European Day of Jewish Culture. The event was opened with an exhibition of pastel drawings by Jovica Prodanovic, titled “Impressions from Jerusalem”. Jovica Prodanovic, who spent several years in the Middle East  on a diplomatic mission, made drawings of the most significant holy places in Israel, as well as of some astounding views in the city. 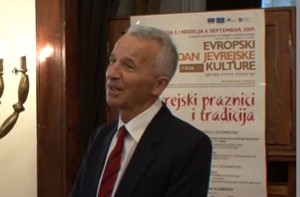 The exhibition was opened by a renowned writer, Mr. Drasko Redjep. The community premises received an impressive number of visitors including friends and public figures. The opening was well covered by the local media. Following the exhibition, the orchestra “Shira U’Tfila” from Belgrade played traditional Sephardic music at the beautiful Novi Sad Synagogue.

NOVI SAD — An exhibition of Jovica Prodanović’s paintings, entitled “Impressions from Jerusalem”, has opened the European Day of Jewish Culture in Novi Sad.

For the tenth year running, the day is marked simultaneously in all of Europe’s Jewish communities, with programs highlighting the continent’s Jewish heritage, tradition and culture.

This year, the event has been themed with Jewish holidays and tradition.

The marking of the day is important in order to dispel ugly and long-standing notions about Jews, the Novi Sad Jewish Community President Ana Frenkel says.

“We have tried, and continue to try, to sow the good around us. And why has this manifestation come to be on European soil – it came to be because, irrelevant of the fact that there aren’t that many Jews on the European continent, they have been exterminated from here, exterminated precisely because of intolerance and ignorance, so let’s have a wonderful thought come from here, to bring us closer, to respect one another,” she was quoted as saying.

The exhibition in Novi Sad last night was opened by author Draško Ređep who said the town has always promoted tolerance, and that a whole generation of local authors wrote in defense of the right “for someone to be Jewish”.

A Belgrade folk ensemble will perform today in Novi Sad as the event continues.