The exhibition of paintings by Jovica Prodanović at the Ministry for Foreign Affairs in 2007. za inostrane poslove 2007. godine. The exhibition was opened by Nikola Kusovac, art critic. 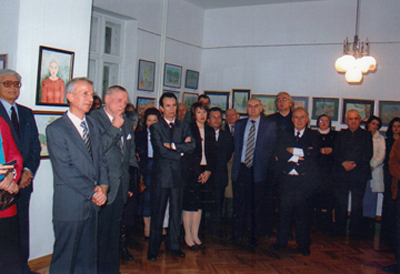 Exhibition opening at the Ministry of Foreign Affairs

“…He received his first lessons from the sculptor Nikola Kečanin, who in the post-war [WW2] period produced a number of monumental sculptures. Later, while carefully studying the artistic works of the great masters in our and Western museums, he learned, unerringly and instinctively discovering the essence of art. He mastered the necessary rules of organisation of painting and the knowledge of artistic elements, which represented a stable foundation on which he constructed his personal poetics, where he created works of art in his moments of rest, as a result of his need to immortalise feelings awoken by the beauty or intriguing character of a certain scene.

Landscapes, which are his greatest preoccupation, represent the most significant part of the creative work of Jovica Prodanović. He has to a lesser extent created portraits where he has managed to bring the faces and internal lives of his models into well-proportioned plastic harmony, still lives and genre scenes where he has captured lively daily events. By painting portraits or parts of the urban landscape, he has left intimate testimonies on picturesque parts of the former Yugoslavia, Algeria, Kuwait, France and in his most recent works, impressions he gathered during his stay in Jerusalem. With an open mind, observing his surroundings, he has used watercolours, a particular and delicate technique which requires skill, immediacy and spontaneity, as well as pastels and oils with which he has created artwork which reflects the unobtrusive beauty of nature and its noble harmonies of colour…”

Vera Grujić
Curator of the National Museum in Belgrade

We are again able to meet and enjoy a new opus of visual impressions of the painter and engaged intellectual, Jovica Prodanović. Before us are pastels of a painter of expressive sensibility for depicting twinkling light which radiates from stone buildings: the blue greys, rusty reds and ambers of the stone of the ancient biblical city of Jerusalem as steady as the stone from which it was built, destroyed, rebuilt, divided, reconstructed throughout the ages of old and new eras.

The motives of the sunlit pastels of Jovica Prodanović depict the present state of sacral monuments and in that respect, have a documentary value for art historians, architects (conservators, restorators), ethnologists and historians. (Let us remember the drawings of Ljuba Ivanović, with motives from Southern Serbia, at the turn of the 19th century). Of the 40 holy registered sites in Jerusalem (although it is unknown how many more biblical archaeology will uncover in the near or more distant future) Jovica Prodanović chose about 20, accessible to visitors and the painter’s vista.

Today almost every holy site in Jerusalem is marked with a church or chapel and most are related to the apocryphal persons and events from the Bible. Chronologically it is not always easy to determine them. Material remains often leave open questions of authenticity of monuments. In the bimillennium past of Jerusalem, a city on the crossroads of national, religious, political interests and conflict between the East and West, succeeding periods have been strongly reflected on the monumental heritage of modern Jerusalem, divided into the Jewish, Muslim, Christian and Armenian quarters of the city. This led to the construction of temples, basilicas, churches, synagogues, mosques and cathedrals which bear witness to the turbulent history of religious cosmopolitism, often bloodied by politics.

Some of these periods – Roman, Byzantium, Arab, Crusader and Ottoman – have been the focus of Jovica Prodanović’s pastels: The Temple Mount – the Absalom Monolith on the slopes of the Mount of Olives, the period of Solomon’s First Temple, the first half of the First Millennium BC (later the site of the Dome of the Rock and Al Aqsa Mosque); the period of the Roman occupation – the wall of Herod the Great (the Wailing Wall), 1st century BC; Dome of the Rock (constructed by Caliph Abdel Malik in 691)- early Arab period, 7th to 11th century, as well as the Al Aqsa Mosque from the same period; the Crusader period, 11th to 12th century – Church of Mary’s Tomb.

It is not by coincidence that Jovica Prodanović included the pastel of Yad Vashem among the depicted holies of Jerusalem. This humanist painter seemed to have wished to relay the message of the modern builders of this symbolic monumental mausoleum constructed in 1957 in memory of the Jewish Holocaust in World War Two; united in their suffering nations will march forward, together through life, irrespective of creed, political persuasion and cultural potential.