Exhibition of paintings of Jovica Prodanovic in the House of Djura Jaskic, Skadarlija, Belgrade, 6 May 1997

The exhibition was opened by dr. Rade Bozovic, the head of the Department for Oriental Studies at the Faculty of Liberal Arts in Belgrade, while prof Trifun Damjanovic spoke about the exhibited works. 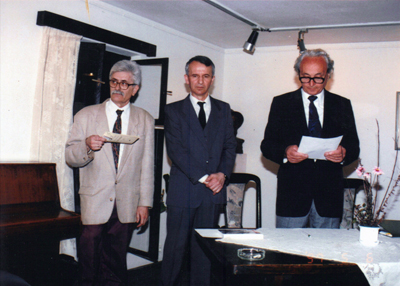 I would like to thank you sincerely for having come to the formal opening of the exhibition of paintings of Jovica Prodanovic.

In particular, I would like to welcome members of the diplomatic corps – ambassadors, counsellors and others, as well as numerous colleagues from the Federal Ministry of Foreign Affairs, members of the Yugoslav-Arab society, Western Slavonians, friends and acquaintances of the Prodanovic family, other guests, visitors and lovers of art.
I would also like to use this opportunity to warmly thank media representatives who have shown interest in this exhibition.
The exhibition is named “Memories” a name that was not chosen by chance as it relates to the life of the author and his dedication to painting.
Painting, as all other arts, requires talent and affinity as well as an adequate milieu, strong individuality, motivation and inspiration, as well as more permanent connection to a certain place and social environment.

The latter two conditions, a stability and permanent of place and environment were not present in the life of the author of this exhibition. However, his connection to painting was permanently present regardless of the environment he was in, whether he was watching and gaining experience from others (in France, England, Egypt) or actively creating in the Mediterranean (Algeria), the Gulf (Kuwait), the regions of Konavli, Western Slavonia, Zemun or Belgrade.

Environments in which he created art were marked by their unusual fate. Many of them were affected by the whirlwind of war or serious internal strife. World War Two did not spare Jovica Prodanovic, who lost both parents and spent most of the war in refuge in the mountains of Western Slavonia, Papuk and Psunj. Together with wounded Partisan fighters he was evacuated with airplanes of the British Airforce in 1944 to the already liberated island of Sicily which was under the control of the Allies. The winds of war caught up with him again in Egypt in 1967 and in Kuwait (1984-88) through the direct threat of the Iran-Iraq war. Two years after his departure from the Gulf, Kuwait became directly affected by armed conflict. Armed conflict broke out in 1991, after fifty years, in his native Western Slavonia. The landscapes of Algeria where he painted his most beautiful landscapes became the place of brutal internal reckoning.

Nevertheless, his painter’s palette radiates with optimism, regardless of the space, place and time in which he created.
The painting opus of the Jovica Prodanovic has a particular expression which moves between realism and impressionism. The observer is in direct contact with his work and its aesthetic content.

It should be mentioned that the academic sculptor Nikola Kecanin, his art teacher in Daruvar, played a special role and had a decisive effect on his permanent dedication to painting.
The war in the former Yugoslavia stopped Jovica Prodanovic for a while in his creative endeavours, as was the case with numerous other painters and artists.
The exhibition, whose formal opening we are attending today, in the exceptional ambience and atmosphere of the House of Djura Jaksic,  the famous painter and poet, represents the sixth independent exhibition of Jovica  Prodanovic. It also signifies the search for new paths in new circumstances.” 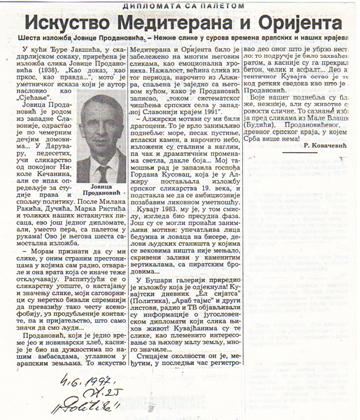 Article from the Politika daily newspaper