The exhibition of paintings by Jovica Prodanović at the Small Gallery in Belgrade, 1982. 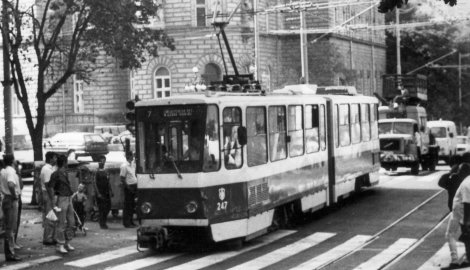 The Small Gallery was situated in 74, General Ždanova Street. This is where my first independent exhibition took place. It was interesting how the first exhibition actually occurred. During the period between 1977 and 1981 I was working in the Embassy of the Socialist Federal Republic of Yugoslavia in Algeria, at the post of First Secretary – Attache for Press and Culture. Algeria as a Mediterranean and Saharan country is extremely rich with motives for painting which was a special inspiration to me. I used every free moment for painting, and that too, oil-on-canvas. In autumn 1979, in the name of the Serbian National Museum, a famour restaurator and curator Gordana Kusovac, arrived in Algeria to set up an exhibition called “Serbian art of the 18th and 19th century” in the Algerian National Gallery.  Since I was responsible for cultural issues, I was helping Mrs. Gordana Kusovac. Among other things, I invited her and our ambassador Nedeljko Zorić to dinner at my place. Some of my paintings were already displayed on our walls. Mrs. Kusovac asked me whose paintings they were. I replied they were mine. She said: “I advise you while you are still here to make efforts and prepare an exhibition of your works.” I had one and a half years left in Algeria. I spent all my free time in painting. While travelling outside the city I was always accompanied by my family – wife Vesna and daughters Marina and Ana. I had a desire to organise an exhibition of my paintings while I was still in Algeria. However due to a set of circumstances this did not happen. I organised it in Belgrade in the Small Gallery. Mrs. Gordana Kusovac attended the opening, together with her husband Nikola Kusovac, a curator of the Serbian National Museum and a leading art critic.