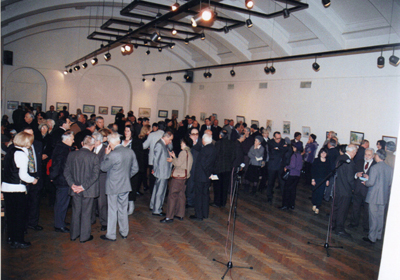 At the exhibition opening in Ruski dom

The exhibition was opened by the  laywer Veljko Guberina, while professor Miroslav B. Mitrovnic spoke about the exhibited works.

“Communication in the works of Jovica Prodanovic”

I am afraid that some may find my brief presentation to be lacking the usual spices expected from the interpreters of artistic works. I will leave out the analysis of the form, composition, idea, texture, harmony of exhibited works, and I will use a few words, whose purpose it is to explain only one segment of the exhibited works: the power of communication in the works of Jovica Prodanovic.

It is believed that the biography of an artist is the best way of getting into the spirit of everything he has created, and his work is the expression of his internal life. Prodanovic has adopted many thought and expressions, as you can see in his biography in the catalogue – in orphanages and children’s boarding houses, schools, universities, learning from wise and good people. He has also amassed experience, which is not in the catalogue, by spending time in Kosovo or clearing debris in institutions destroyed during the NATO bombing. The degree to which his paintings coincide with the experiences of his life, is the measure of the degree in which he will provoke similar experiences within us.

This experience, shaped in his life, family, among friends at work in the country and abroad – was intellectually transferred to art as the highest form of communication. This is why is his work there are no formal elements, no particularity, heavy and unclear assumptions.

It is true that what he has produced is by itself beautiful and personally satisfying – which is also satisfying for us as the public. His paintings express his emotions and perhaps in some undefined way him too. (The attempt to understand the spirit of the artist only on the basis of his work could be truly dangerous).

In his work, he battles against the absence of individuality, he does not exclude moments of privacy and he bases then only on the elements which are close to all of us in their affects and impetus. This is why we can easily conclude that they are rare works of arts which satisfy both the artist and the public.

While creating art, Prodanovic did not calculate, consciously engage and become absorbed in this attempt to communicate, because modest as is he is, he would rather tell us that to him painting is just a personal leisure activity. Whether the public, particularly well-acquainted part of the public, will like his paintings and whether art critics will react to it – these are things that he is wise enough not to give too much thought to. He is not attracted by the bait of “immortality”, long-time fame, a permanent place among the great. But this is only superficial, because his main preoccupation is that his paintings be a source of satisfaction and new experiences to people.  And this is something disguised and eccentric art cannot offer.

This is why the motives in his work are very interesting with a strongly expressed desire to communicate and stimulate through colour and form, to create a close and natural agreement between artistic impetus and possible impetus among us, the public, the observers.

And let me close with the comments of an enthusiast:

It is dangerous to assume there must be only one correct interpretation of a work of art. No. In all great art, there is always something that is unexplainable or unexplained. This applies to the works exhibited here. And this may be the most important thing – let us expose ourselves to the risk of getting answers to the unexplained at the next exhibition, in the new works of Jovica Prodanovic.