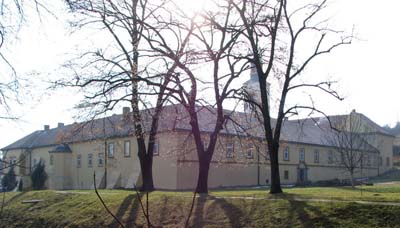 The exhibition of paintings by Jovica Prodanović at the Krušedol Monastery in 2009,  as part of the Third Krajina religious-national assembly “Krušedolska zvona” held on that day.

The Assembly was organised by the Association of Refugee organisations of Serbs from Croatia in Belgrade and as a traditional assembly of citizens on the occasion of the anniversary of the suffering and expulsion of Serbs from the region of Western Slavonia. It was attended by a large number of political cultural and public figures from the Republic of Srpska and Serbia. His holiness the vladika of Banat, Nikanor, served a lithurgy and requiem for the Serbs who died in the wars from 1991 till 1999, in the monastery’s church of Annunciation, and blessed the Assembly.