Introductory word by Vera Grujić at the opening of the exhibition 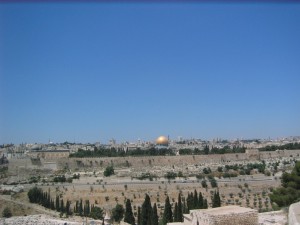 The fact that this is already the sixteenth independent exhibition of Jovica Prodanovic, an impressive number even for artists for whom painting is their main occupation, is a testimony to the love of art and the enthusiasm which weave through every one of his works. During the past decades, while living in countries he had been posted to during his diplomatic service as well as in areas of the former Yugoslavia, through his work he has noted his impressions inspired by beautiful and picturesque landscapes, urban environments and lively scenes from everyday life, or analytically penetrated into the characteristic essence of the physiological and psychological attributes of persons of whom he has done portraits. Since 2006 he has been particularly absorbed by motifs from Jerusalem, the ancient city which bears the traces of ancient civilizations, the city that has been torn down to its foundations many times and constructed again, the city of the tenets of the creed of Jews, Christians and Muslims which contains the remains of the Temple of Solomon, the Holy Sepulchre and the place where it is believed the Prophet Mohammed ascended to the heavens.
Jerusalem’s rich history is conditioned by its geopolitical position and its importance as a sacral area, toponyms known from holy books and linked to personalities whose actions represent the tenets of the three religions, and is preceded by a long pagan past as well as a multitude of specific characteristics of numerous national and religious groups. Jerusalem has attracted believers, scientists and tourists from all corners of the globe, but also artists, particularly in the 19th century. During this period, the interest of Europeans in this region was to a great extent awoken by Napoleon’s  military campaigns in North Africa and other significant historical events. As a result, unusual oriental ambience and exotic personalities became a frequent inspiration of artists. Prior to the works of orientalist painters,  during the Middle Ages when organized pilgrim tours to the Holy Land began, motifs from Jerusalem appeared in pilgrim guidebooks, which were later printed and became more accessible to a larger number of people, playing an important role in private piety. These guidebooks existed within the Serbian Orthodox Church whose representatives lived in the Holy Land from the time of the Nemanjic empire. One of the most popular illustrated religious books was Description of Jerusalem by Hristofor Zeragovic, written in the 18th century not only for physical but also spiritual pilgrimages. Specialized workshops from the Holy Land produced en masse hajj  icons, so-called jerusalems, with a depiction of the Holy Sepulchre in the central part, flanked by images of Christ and the Madonna on the two sides and framed by illustrations from biblical events and holy places, which were both a testament of the hajj and a type of status symbol.

Jovica Prodanovic has spent a great deal of his working life in this part of the world. Before Jerusalem attracted him in an artistic sense, he knew very well its political and cultural history, as well as the history of religions – this is why his artistic interest is focused on the old city centre. With a respect equal to that of millions of believers who have experienced their greatest spiritual experience there and who keep pictures of the places they have visited as their holiest of holies, he joined the ranks of artists who had placed their easels in the same places, wanting, like his predecessors, to immortalize in his own way these monuments whose importance often exceeds their external beauty. In relaying the direct experience of what he has seen, he has mainly painted architecture, panoramic scenes and landscapes executed in balanced coloristic harmonies, which he occasionally livens up with contrasting details. Even though he gravitates towards a certain realistic relationship towards reality, these works of Jovica Prodanovic – paintings which almost never portray people, are infused with light and a lyrical atmosphere – feel almost metaphysical and from the ‘other’ side.

Vera Grujic
Senior curator in the National Museum in Belgrade
Belgrade, May 2011