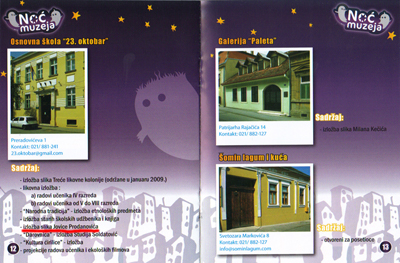 Jovica Prodanovic – Victory of a Dream
(Speech of Komnen Kolja Seratlic at the opening of the exhibition in Sremski Karlovci, 16 May 2009)

There are several reasons why the exhibition of paintings of Jovica Prodanovic, here, today in this school, in the renowned Sremski Karlovci, where each generation brings new talents for painting, where artists’ colonies are held, represents an exceptional cultural event. As a person who is not a professional art critic, but who has as a long-time journalist, diplomat, press and cultural attaché, opened exhibitions in Mexico, Moscow, Buenos Aires and Trencin in Slovakia, I have the great pleasure and honour to say a few words.

I will repeat a usual expression, which is in this case completely true – Jovica Prodanovic is as along-time diplomat, the best painter among diplomats and the best diplomat among painters. He is an exceptional intellectual, a lawyer who speaks many languages, in particular Arabic, and has been an Arabist for more than fourty years. Despite all of this and many other things which remain unsaid, he has never been haughty or gotten on his high horse; his modesty, specific calmness of spirit, analytical approach to problems, he has never slighted or shamed either his colleagues or foreigners in his long diplomatic career.

Jovica Prodanovic bears his own specific life imprint, which I personally feel very deeply, as this was one of the key elements of our friendship, since we both found ourselves orphans at an early age. As hard as his life may have been, his paintings are full of optimism, and are painted with bright and cheerful colours. His strong will and personality helped him overcome the most difficulty obstacles and temptations. He is an artist of exceptional expression, mysterious inspiration and individual communication.

His talent for painting was uncovered by the academic sculptor Nikola Kecanin who taught him art in his primary school. One day, Kecanin brought an anthology of painting in colour and gave Jovica Prodanovic the task of copying a painting of the French Impressionist Cezanne in watercolours. After two hours of work, the painting was finished. The students who were present were surprised and admired the painting. Kecanin himself did not hide his satisfaction. This was the start of the friendship between the experienced sculptor and his pupil, whose talent he supported. Jovica spent his free time by visiting the studio of Nikola Kecanin, watching him sculpt in clay, helping him at times and himself also doing work in smaller format, portraits, sculpting busts and acts. His teacher would give him books about Leonardo da Vinci and Michaelangelo and he would copy their sketches. Jovica showed particular interest for the French Impressionists – Renoir, Cezanne, Manet, Monet, Toulouse Lautrec, Van Gogh, Utrillo and others.

Jovica Prodanovic faced a great dilemma when deciding on what profession to choose – the art academy or law. He told me that in the last moment he chose law, which was crucial for his social and political engagement in the last years of high school. However, he never abandoned painting, because that was his intimate world in which he experienced absolute satisfactions and personal integrity. And, as I said in the beginning, fate led him to the diplomatic service.
As you know, the diplomatic service is a calling, an art. This is why Jovica had a great start from the beginning. Painting showed to be an excellent means for the diplomatic communication of links and confidence. During his work at the Yugoslav Embassy in Algeria, he used every free moment to activate his painter’s passion in the ambience of the Mediterranean. We as a people belong to the Mediterranean culture, and not to the metaphysical Western one. He painted a series of oil paintings of Algerian motives which he exhibited at a independent exhibition upon his return to Belgrade in 1982. This was followed by other independent and collective exhibitions.

Today, before you is the thematic independent exhibition named “Impressions from Jerusalem”, created in pastels. The paintings were done directly in open space, on the spot, often in the greatest tourist attractions of the Old City of Jerusalem or on the slopes of the Mount of Olives. These impressions are unique among deep believers of different religions from the whole world, as well as among curious tourists and travellers.

I hope that we will be able to come across Jovica Prodanovic’s new challenges for a long time to come, and that many people will spend time in deciphering the opus of the artist, who has found his own measure in the world and the world within himself. When they asked Rodin how he managed to create such beautiful sculptural forms, he responded by saying “I take the material and get rid of everything that is superfluous”. We can see there is nothing superfluous in the paintings of Jovica Prodanovic.

With great respect, I would hereby like to officially open this exhibition.